Title: FDR Had the Great Depression, But Biden Has Big Data 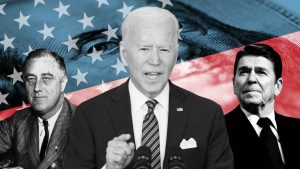 President Joe Biden’s multi-trillion dollar plans to revitalize the US economy are rightfully drawing comparisons to his predecessor Franklin Delano Roosevelt. But while it’s the same goal, the two have somewhat different approaches, reflecting both the distinctive circumstances and the better data available to Biden.

Biden’s initiatives are a lot like a newer New Deal in some respects. The recently announced infrastructure spending plan includes money for roads, bridges, housing, schools and a better electrical grid — all things that FDR spent big on as well. If passed, Biden’s bill will alter the physical landscape of the nation, leaving a legacy of shiny new construction and improved living standards for the poor. Biden’s support for unions also echoes FDR’s creation of the modern system of labor organizing. Like the New Deal, Biden’s programs would help reverse a decades-long trend of rising inequality.

But the similarities end there. The economic challenges Biden is facing are very different from the ones FDR grappled with, and his approach is necessarily unique.

For one thing, the economic crisis Biden faces isn’t another Great Depression. Covid didn’t smash the US financial system, nor has it apparently caused a wave of pervasive economic pessimism. In fact, most expectations are for the economy to come roaring back after vaccines finally send the pandemic on its way.

Because the Covid crisis triggered only a modest overall lack of demand, Biden didn’t have to focus on interventions with a high fiscal multiplier; instead of public works, his initial relief effort just mailed out checks. And since there’s no longer a gold standard in the US currency system and the Federal Reserve has been quite willing to hit the gas on growth with rock-bottom interest rates, Biden didn’t have to worry about monetary conditions either.

The current president also has much better data than FDR had to help him figure out what works and what doesn’t. The architects of the New Deal mostly just had data on prices and domestic output; thus, they tried to control these things directly, with the National Recovery Administration and the Agricultural Adjustment Administration. The results were underwhelming, because controlling prices and product quantities is not an effective way of addressing a demand shortage.

Biden, on the other hand, has decades of careful empirical economics research to guide him. And that research increasingly shows that cash benefits — such as the new child allowance, $1,400 checks and additional unemployment assistance — is a lot more beneficial than was previously realized. Thus Biden’s early focus on handing out money.

Finally, because he came in at the tail end of the crisis, all Biden really had to do on the recession-fighting front is to continue the successful policies of 2020 for a little while longer. That freed him up to focus more on a long-term structural transformation of the US economy. FDR eventually did a lot of this, but it really took a worldwide war to bring it to fruition; Biden is tackling it in his first year.

Biden’s plans to reshape the US economy rely in part on scientific research, with several major initiatives to increase federal research and development spending, including a new branch of the National Science Foundation and hundreds of billions of dollars to upgrade the nation’s laboratories. This echoes a successful Roosevelt-era program: the Office of Scientific Research and Development, created during World War II, which spawned technologies that ended up boosting many US high-tech industries in the postwar period. Biden is, in effect, learning from FDR’s success and scaling it up, which is exactly how government policy ought to be done.

But when it comes to innovation and productivity, Biden is facing a much sterner long-term test than FDR. Even as the Great Depression was holding back the economy in the 1930s, the US was actually doing lots of useful innovation; those discoveries were put to good use in the postwar years. In contrast, Biden is dealing with a productivity slowdown that is now well into its second decade. Hence the focus on reinvigorating the countries’ research network.

Biden is also contending with much greater economic competition than FDR. Whereas the US was a fairly self-contained economy during the Depression (and even more so after a round of ill-advised tariffs), in the 2020s the US is facing a global competitive challenge from China unlike any it has seen before.

With the economic center of the world shifting to Asia, Biden doesn’t have the luxury of assuming that the US can make everything it needs; thus, his plans include initiatives to reshore strategic industries and critical supply chains. This direct intervention in the structure of American industry is less than what FDR accomplished during WWII, but much more than the earlier New Deal. Biden also wants to increase spending on in-home care services, reflecting greater uncertainty about the future of work than existed in FDR’s day.

So whereas FDR’s biggest burden was reflating a moribund economy, Biden’s great task is to reverse the productivity slowdown and meet the competitive threat from China. FDR transformed the structure of the US economy, but mostly either by accident or from the exigencies of WWII. Now Biden has to do it on purpose.